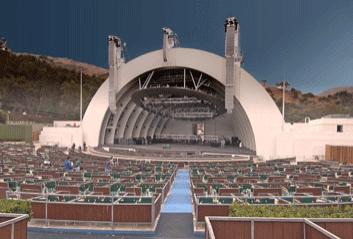 CLIENT OBJECTIVES
To modernize and update a historic landmark by replacing its band shell and related facilities during the eight-month off season.

PROJECT SOLUTIONS
Dynalectric L.A. was involved in demolishing the old shell and constructing the new, larger one, as well as in the installation of rear-projection screens, extensive pyrotechnic facilities, a computer-controlled acoustic canopy, and a 150-foot-in-diameter turntable built flush with a new stage floor.

Within the client's fast-track schedule, Dynalectric L.A. provided underground and distribution equipment, a feeder conduit and switchgear, an audio-visual backbone system, overhead conduit systems, wire and cabling, the acoustical canopy, a dimming system, and various finishing details. At the project's peak, 46 electricians were on the job.

Our value in this project extended far beyond construction activities. The company assisted in a variety of more specialized and technical ways as well. For instance, the original facility included electrical services spanning more than 70 years. Most of the routes for these were unrecorded. Furthermore, during construction, electrical rooms, the main switchgear, and sub-panel rooms were relocated from one side of the stage to the other, significantly altering the destination of prior wiring. At the same time, many existing cables led to parts of the facility that were not modified, such as the box office, gift shop, and some restaurants. All of this created both immediate and potential long-range difficulties.To help avoid these, Dynalectric L.A. labeled the existing system wires, including the underground conduits for the infrastructure, during construction and then reconnected them to the new systems at the end of the project.

In addition, Dynalectric L.A. augmented the contractor's 3D coordination platform by using Autodesk Building Systems, software that works with AutoCAD. It unifies building engineering design, documentation, and analysis in an integrated environment. This allowed the company to lay out all of the equipment and systems — electrical distribution, dimmers, controllers, and winch controllers, as well as audio-visual system cabinets and related conduit systems — prior to installation.

The pyrotechnical systems presented another challenge, since they use a one-of-a-kind firing mechanism. To accommodate this mechanism, Dynalectric L.A. acquired special bundled wire and wove it into the maze of steel that made up the building. This wiring is highly reliable. It can also handle the firing current that sets off the fireworks, while accounting for the distances involved from central control points to all of the remote locations where the pyrotechnics are installed. In its AutoCAD drawings, the company showed exactly how to route conduits from one point to another without interfering with other structural elements or mechanical components. At the same time, the firm did this within criteria established for separating electrical and audio systems to avoid audio hum or striped noise.

CLIENT BACKGROUND
Christened in 1922, the Hollywood Bowl is the world's largest natural amphitheatre. One of the few venues of its kind with a permanent hard-wired fireworks system synchronized to live music, "the Bowl," as it's known locally, seats just under 18,000. It has been the summer home of the Los Angeles Philharmonic since its opening. In addition to the Philharmonic's concerts under the stars, however, the site has hosted everything from rock concerts to an annual Easter sunrise service.